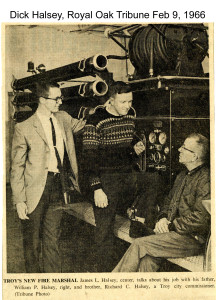 My name is Dick Halsey, and it was my privilege to serve on the Troy City Commission (now called City Council) between 1965 and 1968. At the time of my election I was a 27 year old teacher at a Bloomfield Hills private school, living on Vanderpool Street, a few blocks from where I grew up in the Big Beaver area. I was a fifth generation Troy Halsey, and the area at Maple and Livernois Roads was called Halsey Corners years before, so I was at home.

As a child I became interested in politics. My grandfather, John Lee Halsey, served on the Township Board, and his brother was the Township Supervisor. When my grandfather died in 1944, my grandmother, Winifred Belle Halsey, succeeded him as Justice of the Peace.

In 1956, while a student at Wayne State University, I wrote a history of Troy Township that was published in a local weekly newspaper.  I had served on a citizens study committee for Troy Public Schools, a Civil Service Study Committee for the City of Troy, and as a Volunteer Firefighter. Still, when I announced my candidacy for a seat on the City Commission, my youth created questions. A reporter asked me why I thought I would have a chance, and I told him that if all my cousins voted for me, I was in. He printed my remarks. My campaign cost less than $200, and the largest donation I got was $25 from my wife’s parents. I ran against two incumbents, with few big issues to gather attention. My easy win surprised some, but not me.

The City of Troy changed greatly during my tenure on the Commission. Every week we approved new subdivisions, authorized the extension of public water and sewer lines, and amended zoning and master plan maps. Millions of dollars were at stake, as developers asked for rezoning to allow for more intensive, and profitable, use of empty farm land. Roads were paved that had been gravel, new schools were planned and built (one named for my great-great-great grandfather, George P. Morse), and homeowners associations formed and became a political force. Speakers appearing at the Commission began to say they spoke for hundreds of others, as they favored or opposed some pending action by the City.

I was impressed with the civility of politics in that time. The ‘60s were a period of national turmoil, but no one swore at me while we deliberated, and my fellow commissioners listened politely to some of my long-winded discourses. I was never offered a bribe or threatened in any way. My term ended before Watergate, so the newspaper coverage was fair and not sensational.

By 1968, I had been promoted to an administrative position at Roeper School and had accepted a part-time teaching position at Eastern Michigan University, so I decided to retire from politics. I value my experience as a member of the City Commission. In 1971 I moved out of Troy to become a School Head in Oxford, and I now live in Interlochen, but I am still interested in Troy history and politics.