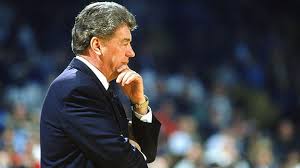 In 1990 Chuck Daly, the coach of the 1989 NBA Champion Detroit Pistons, and an investment group attempted to open an upscale, sports-themed restaurant in Troy. The location of the restaurant was to be in the vacated building of the Big Beaver United Methodist Church.

Big Beaver Church has been a part of Troy Township and, eventually, the city of Troy, in one form or another since 1845. In 1945, three days after celebrating its centennial, the classic, white, wood-framed church burned to the ground. The congregation built a new church, which was dedicated on July 25, 1954. It was this building that was to become the home of Chuck Daly’s Hoops Restaurant.

Wanting to move to a less congested and larger location on John R. Road in Troy, the congregation had put their building up for sale. That is when the Daly Group saw the opportunity for their restaurant. A very large problem arose, however. To be a successful facility, as the Daly Group envisioned, the restaurant needed a liquor license. Michigan law prohibited the sale of liquor within 500 feet of a church. Only two hundred feet away, and across Hartland Avenue, was the doorway of the Troy Baptist Church.

After neighborhood objections, and much publicity in the newspapers, the license was refused. The restaurant never happened. Later, the Baptists bought the building for their own use, and Big Beaver United Methodist Church successfully moved to their John R. location.