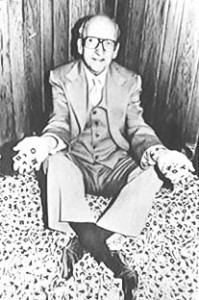 According to different sources Scrabble® Brand Crossword Game is now found in one third to 3/5 of American homes. Between one and two million Scrabble® games are purchased in North America every year and thousands of people play in over 180 competitive Scrabble® tournaments in the United States and Canada.

The game was the brain child of Alfred Mosher Butts, an architect who hailed from Poughkeepsie New York. While unemployed during the Great Depression he decided to invent a word game based on chance and skill built on the concepts of crossword puzzles and anagrams. He studied letter distributions in New York Times articles, calculated letter frequencies, and applied cryptographic analysis of the English language as he worked on his idea.

Alfred called his game Lexiko and then renamed it Criss Cross Words. Game manufacturers weren’t interested in it, but a businessman named James Brunot was intrigued. He bought the rights to the game and agreed to pay Butts a royalty for every game he sold. Brunot refined the rules and gave the game another new name: Scrabble®.  Then he rented a schoolhouse in Connecticut and with the help of friends started making the game pieces.

Brunot lost money on Scrabble® for four years. His luck changed in the early 1950s when the president of Macy’s discovered the game, liked it, and ordered some for his department store. Scrabble® was an instant success. By 1952 Brunot and his family could not keep up with the demand and licensed Selchow &Righter Co. to manufacture the game. They purchased the Scrabble® trademark from Brunot in 1972. In 1986 Coleco, the maker of Cabbage Patch Dolls, purchased Scrabble®. Hasbro, Inc. acquired Scrabble® in 1989 when Coleco declared bankruptcy.

Mr. Butts enjoyed playing Scrabble® until the end of his life. He died in April 1993 at age 93.