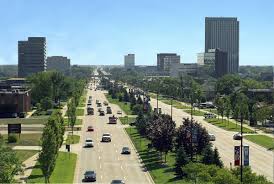 George Vilican a partner in the planning firm Vilican Lehman defended the need for the City of Troy’s comprehensive zoning ordinance. He stated:

When built up Troy will have about 133,000 people, of which 17,960 will be school children. You will require 250 acres for schools, 145 acres for parks and recreation areas, 198 acres for shopping centers, and 1,872 acres for industry. While you are yet in a state of open, rolling land without too much built-up area, you must plan this gigantic growth or you will end up like Detroit, unable to find land for schools, parks and even industry. . .  Under this ordinance and your planning for the future, we are hoping to take the long view and avoid the mistakes others have made.

Following approval of the ordinance in 1957 three local newspapers published copies of an editorial praising Troy for having the foresight to plan for the future.

Compare their predictions with statistics from 2015 graciously provided by Nino Licari, the Assessor for the City of Troy: