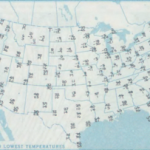 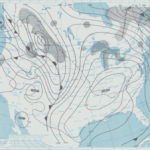 Meteorologists dubbed January 17, 1982 “Cold Sunday.” On that day a much of the United States experienced the coldest temperatures since weather records have been kept. The event was triggered by a high pressure system that formed over Saskatchewan Canada.  Snowfall in the region left the land with no way to retain its heat. Temperatures dropped precipitously and created a mass of cold air that moved south across the US.

Record low temperatures were documented. These included temperatures of −27°F in Chicago, −26°F in Milwaukee, −5°F in Washington, DC and −2°F in Birmingham, Alabama. The lowest temperature of −52°F was recorded near Tower, Minnesota. The temperature in Detroit that day was -9F.