Welcome to the Pathway to Preservation. While COVID-19 has slowed down the restoration of the Niles-Barnard House, we hope to get safely started up again soon. In the meantime, the weather is warming and it’s time to start opening your windows here in Michigan! Let’s shine a little light on to how those windows have changed over the years. 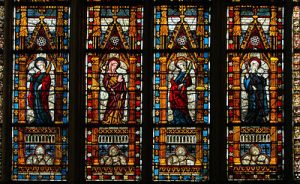 Putting a window in a building is always a bit of a risk. Just think, you have worked hard to create a solid structure that keeps out the wind and the rain, then you cut a hole in it! The first windows in buildings were small and often covered over by animal hide, cloth, or closed with wooden shutters. First century Romans were the first to introduce glass into their windows, giving their interiors natural light while protecting them from the elements. By the tenth century, artists set colored glass into lead cames to create large stained-glass windows.

While wood was plentiful for building early European settlements in America, metal fittings were expensive, and glass was a rare luxury item often imported from England or France. Windows and windo

w glass were so expensive, that an early Jamestown Rhode Island colonist returned home after a trip to find that pirates had looted his house and taken the valuable window glass! The earliest colonial windows were casement windows with diamond leaded panes, but vertical sliding sashes were developed by the late 1600s and were commonplace through the 1700s. The first vertical sashes often have an upper fixed sash, and a lower sliding sash propped open with a stick. 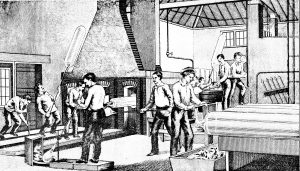 These early windows used crown glass—glass blown by hand into a large flat disk four to six feet in diameter and cut into panes. The center of the disk, or “bull’s eye,” was often recycled or used in secondary applications and sidelights, not as a central focal point that we often consider a colonial style. Cylinder glass replaced crown glass in the 1700s and was used for window production well into the mid-1800s. Instead of a flat disk, glassmakers blew a long tube or cylinder of glass, cut off the ends, slit the top, and opened it up into a flat sheet. The size of windowpanes was still limited, so windows were created by setting individual panes into wooden or metal mutins creating larger sashes. The cost of the window was determined by the expense of the glass plus the amount of joinery needed, so homeowners showed off their wealth by including large six over six or even twelve over twelve windows in their homes. 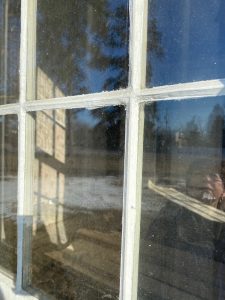 We are lucky to have many original windows throughout the Village, but maintenance is the key to their preservation! Windowsills can easily collect water and deteriorate, the glazing that firmly holds glass panes in place needs regular checks and repair, and glass is easily broken. On top of that, windows were frequently replaced or updated for aesthetic purposes. A quick look at the glass is the first clue to identifying the age of windows, but it may not tell the entire story. Roughly, crown and cylinder glass (produced into the late 1800s) has a wavy quality, but rolled or poured plate glass (produced from 1850-1950) might look quite similar to modern float glass (developed in the 1950s) depending on how well polished it was.

The windows in the Niles-Barnard House are a prime example of this mixed history. Because of its long life, some may date back to the 1840s, but others have clearly been replaced in the 1950s. Some work was done to restore the oldest windows in 2010, but we made the difficult decision to pull and replace all of the windows for the current restoration project. This will give us a chance to carefully inspect each of them and determine which might get a full restoration in the hopes of reinstalling them at a later date. Properly restored historic windows are just as energy efficient as modern windows, but they take time and TLC!