Welcome to the Pathway to Preservation. COVID-19 has temporarily stalled the restoration of the Niles-Barnard House, but it hasn’t stalled our passion for digging deeper and learning more! During this delay our bi-monthly installment will look at how and why the construction of buildings has changed over time. 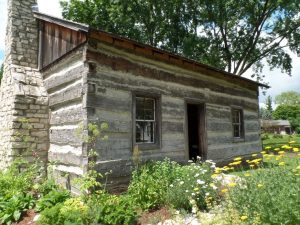 When Europeans arrived in the New World, extensive forests provided a ready source of timber for building. One of the simplest forms of construction was the log cabin. Scandinavians were the first to build log cabins in Pennsylvania, but the technique was picked up and used by the French, English, Scotch-Irish, and others as they settled across the country. Builders stacked logs horizontally, notched the corners, and interlocked the ends to create structural integrity without any hardware (just like your Lincoln Logs set!). Gaps between the logs were sealed or chinked with mud, stones, moss or other plant material. Note that the logs in the Village cabin were shaped or hewn into square timbers with felling and broad axes. The flat surfaces provided tighter joints at the corners and less space between the logs.

Timber framing using post-and-beam construction dates back to medieval times in Europe and 220 BC in India. In this type of construction, massive vertical posts and horizontal beams form the skeleton of the building. These structural members were connected by carefully carved, interlocking joints. A joiner carved the end of one beam to leave a projection or “tenon” which fit tightly into a hole or “mortise” carved in another timber. Beams were also joined and held in place by wooden pins and wedges. Plank, stone or stucco filled the spaces between the timbers. Timber-framing required skilled carpenters but was the most common technique for building wooden houses in the U.S. from the 1600s until the early 1800s. Remnants of post-and-beam construction can still be seen in many barns today. 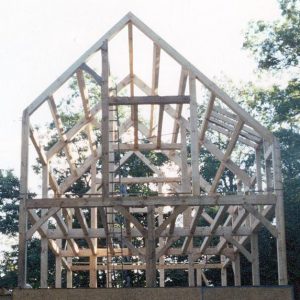 The development of dimensional lumber (standard sizes like 2x4s or 2x6s) and inexpensive wire nails in the early 1800s led to new building techniques. With these materials, unskilled laborers could quickly and cheaply build a house with balloon-framing. The Niles-Barnard House is an early example of this new balloon-framing.  In this type 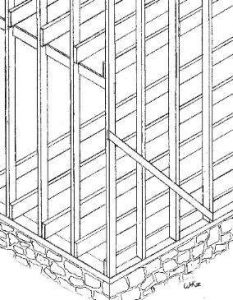 of construction, the weight of the building was distributed among closely spaced vertical studs that ran uninterrupted from the foundation to the roof (sometimes 20 to 30 feet!). This lightweight, load-bearing frame was held together with metal nails rather than pegs and wedges. The exterior was covered in siding while interior walls were often finished with plaster. To build a second floor, the floor joists rested on a horizontal ledger or ribbon that was attached to directly to the studs.

The risk of catastrophic fire and depletion of lumber led to our current building technique—platform framing. Introduced in the late 1930s, platform framing uses shorter studs (12-16 feet instead of 20-30 feet) to frame each floor level as its own unit. Subsequent floors are added to the previous platform. The platforms created by the joists and subfloor serve as a fire break between each floor unlike the previous balloon-framing that allowed fire to travel from th 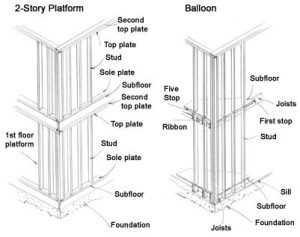 e foundation to the roof uninterrupted. In platform framing both exterior and interior walls can be load-bearing. Modern building materials including plywood and drywall replaced wood and plaster.

When the Niles-Barnard house is completed, it will contain elements of timber framing, balloon framing, and platform framing. From the bark covered beams in the floor joists to the main body and new addition, reading the structure of the building is a look into the history of building itself.