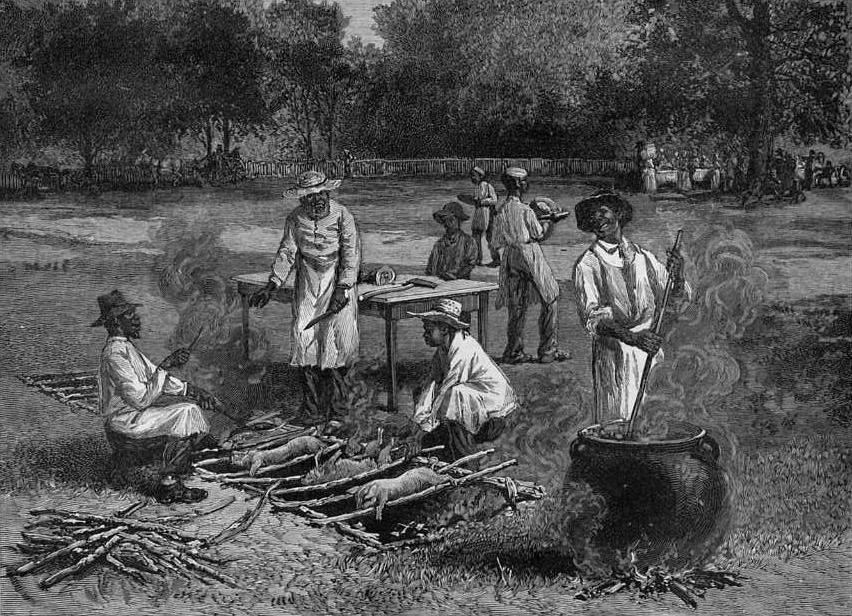 Summertime in the United States is practically synonymous with barbecue cooking, a tradition that really predates written history. In 2007, Israeli scholars from the University of Haifa discovered bones and tools near Mt. Carmel that indicate a serious love of open-flame, slow-roasted meat, left by area residents some 200,000 years ago.

As author and barbeque judge “Meathead” Goldwyn notes in his fascinating article “The Story of Barbeque”the first detailed design plans for a barbecue may be found in Exodus’ description of the Hebrew tabernacle, which was to include an altar for burnt animal offerings. Homer’s Iliad and Odyssey both include accounts of spit-roasting meats during ancient Greek festivals. The Japanese of 3,000 years ago cooked meat in “kamado”, ceramic urns set over hot coals. The “tandoor” is similar and has been used in India for centuries.

The etymology of “barbecue” is most commonly traced to the West Indies, where 1940s Spanish explorers encountered natives using green wood to keep meat from burning as they cooked it over an open fire. Called “barbacoa” by the Spaniards, the tradition was eventually carried northward from Hispaniola into what would become the southern United States. Explorer Hernando de Soto witnessed a Chicksaw tribe cooking pork over the barbacoa near present-day Tupelo, Mississippi in 1540.

Pork was a staple in the American South in the years before the Civil War, with the average Southerner eating 5 lbs. of pork for every 1 lb. of beef. Pigs were easier and cheaper to raise than cattle, as herds needed large spaces for housing and grazing, as well as lots of feed. In tough times, pigs could be turned loose to forage in the woods and recaptured later on. This made their meat tougher and stringier, though, so long, slow roasting was necessary to tenderize this pork.

Nineteenth-century plantation owners hosted large barbecues with “pig pickins” for slaves. The wealthy landowners ate the better meat “high on the hog” and saved the lesser cuts for the help. Later in the century, politicians hosted barbecues as a relatively inexpensive way to garner votes. These gatherings were not specific to a particular social class, as people of all economic means mixed, mingled and ate together.

For the impoverished black populace of the post-war South, barbecue was a tremendously popular way to improve the taste and texture of tougher but more affordable cuts of meat. Former slaves and sharecroppers brought barbecue recipes with them as they moved to Northern cities. Barbecue restaurants became popular in both the South and North, and actually were interracial meeting places prior to integration in the 1950s and 1960s.

In the 1920s Henry Ford, Thomas Edison and E. B. Kingsford partnered to manufacture charcoal briquettes made from the sawdust and wood scraps generated by Ford’s Detroit auto plants. As he had done with the automobile, Ford made briquette production a more efficient industry and briquettes more affordable for consumers.