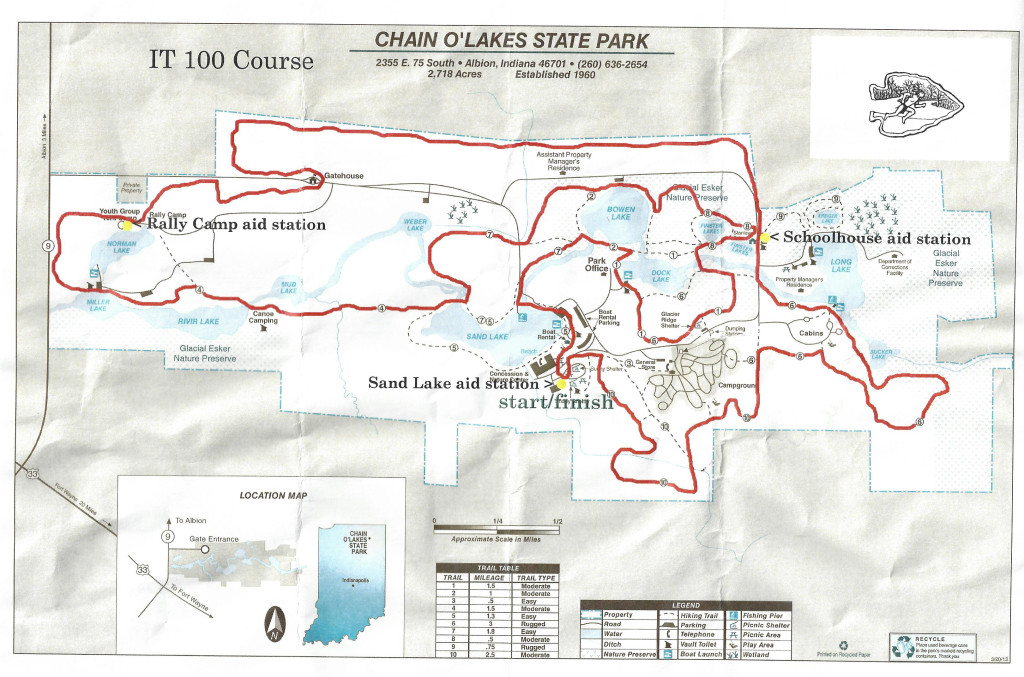 As many Quill readers know, I ran in the Indiana Trail 100 race a couple of weekends ago. It was awesome at times, miserable at others, but overall a great experience for my first foray into the world of ultra distance running.

We started the race at 6am on April 30. Hitting the wooded trail with nearly 400 other people certainly helped reinforce my mantra for the first half of the race: Don’t be an idiot, i.e. don’t go out too fast and get tired early on. (My mantra for the second half of the race was Don’t be a wimp). The crowd thinned within the first few miles as each runner settled into his or her own pace. The sun was up by the time I met Loraine and Ward at the first aid station, so I traded my headlamp and flashlight for a ball cap. It was peaceful in the woods, there was a lot of camaraderie among the runners and spirits were high. 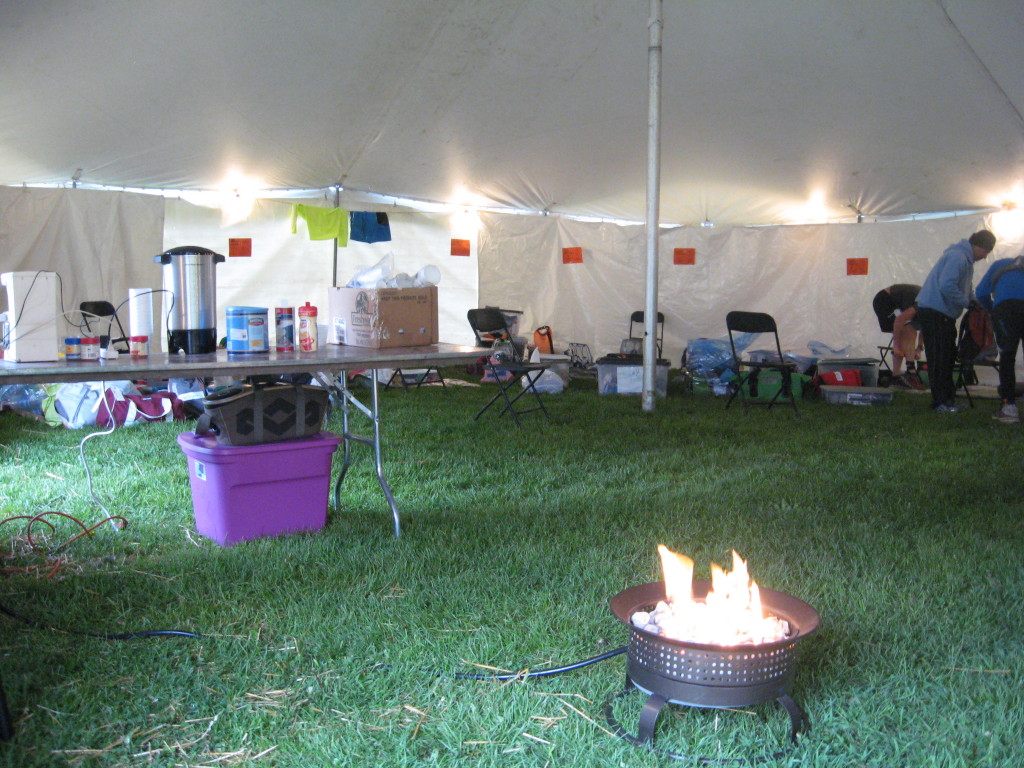 I met John and Sue next at the second aid station for a refill of my hydration bottles—one water and one a homemade “Gatorade”—and a pita with hummus. Yes, I can eat while I run, but I had to train this ability, too. I inhaled Gu energy gels, a pita, grilled cheese sandwiches, pierogis, baby food, coffee and pop-tarts—this was all excellent fuel for my first 50 miles. Since running ultra distances leaves you with a calorie deficit, you have to start eating pretty early on to offset this as much as possible. My goal was to take in at least 200 calories an hour. 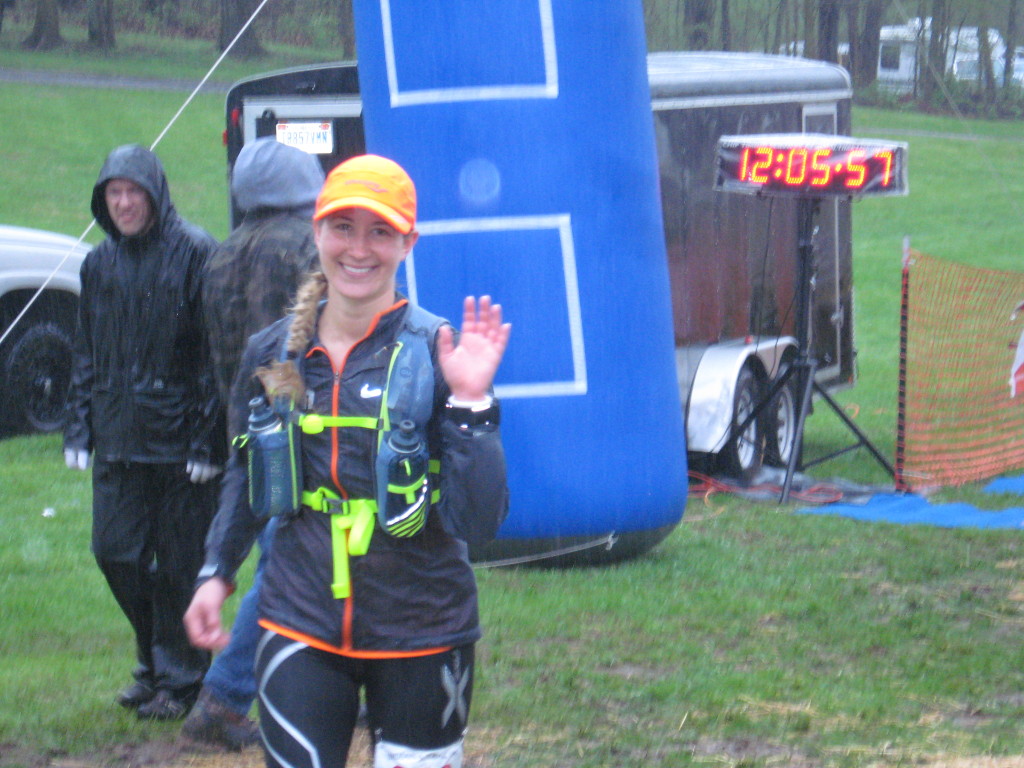 My first three course laps (50 miles) were great—I even shaved 30 minutes off of my best 50 mile time! I was feeling good, making friends, having laughs—a guy barreled past me on the trail, headphones in, singing The Ramones’ “I Wanna Be Sedated” at top of his lungs—and just enjoying the experience. It had started to rain near the end of the second lap, but I had convinced myself that this was “refreshing” and barely noticed it. 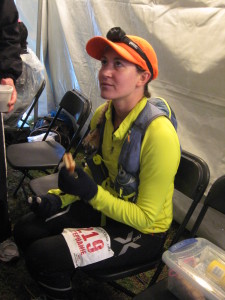 Fast forward to the start of the fourth lap—the rain had soaked through my lightweight rain jacket and both shirts, so my mom brought me dry stuff to change into and I switched out my socks and shoes for dry gear, as well. No blisters, hooray! I did cool down quite a bit when I stopped this time; my hands were very swollen and it took me about 10 minutes to change shirts. I got a “head check” from one of the amazing race volunteers and then I hit the trail again, this time with Dad as my pacer.

Luckily, we had each taken headlamps with us when we started, because it got dark between the first and second aid stations. And the rain continued to fall, turning the once-pristine dirt trails into barely navigable, muddy slip-and-slides. My dad shared this observation: 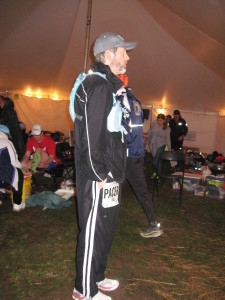 “I have replayed various images of the final lap in my mind dozens of times in the last 48 hours, and I don’t think I’ll ever be able to describe the experience adequately. I came up with something that might be close – take a warrior dash, add extra mud, rain, cold, darkness – then multiply the distance by two! And I’m only talking about the last 14 miles. Never mind the 50 miles that Stephanie and many others had already put in. There were so many portions of the course that, to me, seemed unbelievable – and yet, there we were, going through them anyway we could. I learned something on the way: when you’re facing something that looks or seems impossible, it may not be impossible. Sometimes you just have to press on. This experience also changed my perspective on some of the minor trials, annoyances and irritations of life – they became rather unimportant in comparison to such an experience.”

After about 17 and a half hours, I decided it was time to be done and called it a day at 64 miles, or just over 100 kilometers (yes, I have now switched to the metric system, so that I can wear all of my cool Indiana Trail “100” swag!). Going into the race, I really felt prepared for muscle soreness, fatigue and sleep-deprivation—kind of looking forward to the hallucinations, actually—but there wasn’t much I could do about mild hypothermia, so stopping at 100k was the right move. As John pointed out, the event had become less of an endurance race and more of a test of survival. 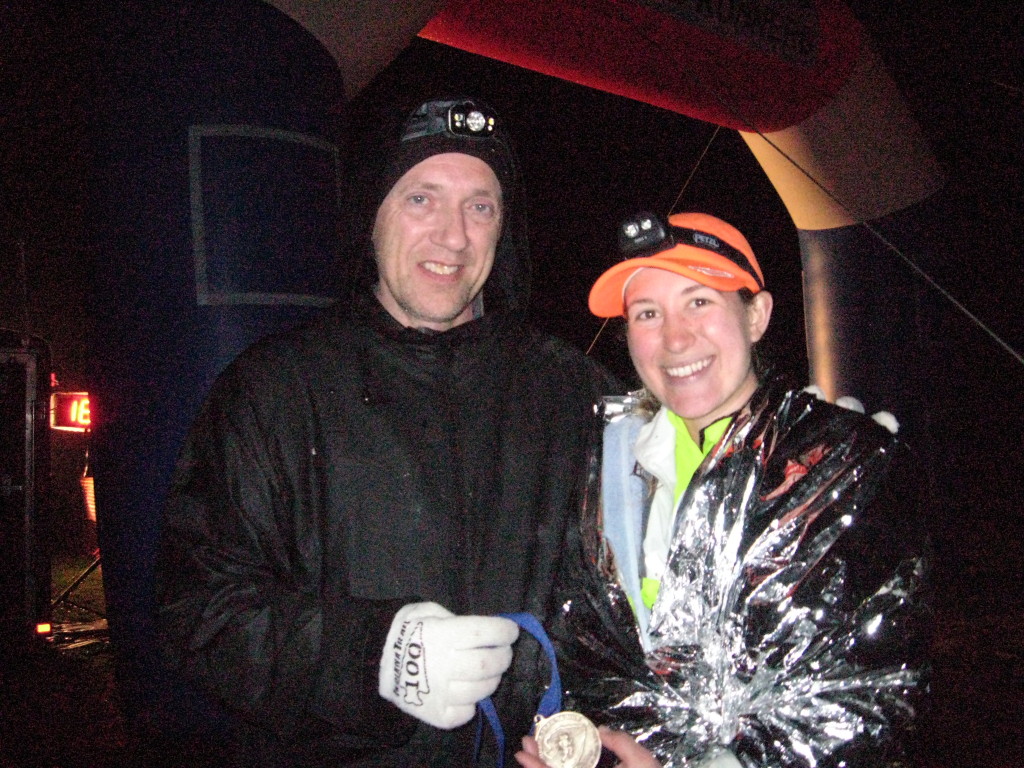 As it turns out, I was in good company—only about 38% of the field completed the entire hundred miles this year. For completing 50 miles or more, runners get a medal at this race, so I made sure to pick mine up before heading back to the campsite for some much-needed rest. And after a couple of days, I was even able to walk normally again. Even better—when I came back to the Village, I learned that the Ultra Fundraiser had generated about $3,500 of donations for the Troy Historical Society!

Thank you to everyone who supported this race. Your words of encouragement, contributions to the fundraiser and help as crew members during the event mean so much to me.