A Brief History of Running Continued 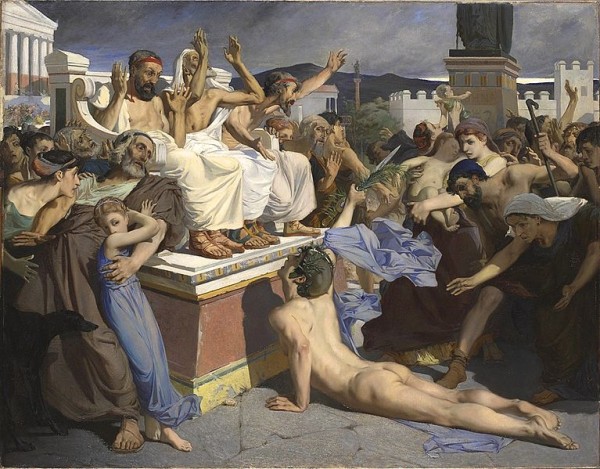 Painting byLuc-Olivier Merson (21 May 1846 – 13 November 1920) depicting the finish line of an ultramarathon Pheidippides as he gave word of the Greek victory over Persia at the Battle of Marathon to the people of Athens.

And then there were the Olympics—people ran competitively for sport. The ancient games held in Greece from 776 BC to 261 AD did not feature the marathon distance—that wouldn’t appear until the modern games were held in 1896—but athletes did run shorter races of less than 5 kilometers. Along with the resurrection of the Olympic Games in Europe, the 19th century brought with it another fun component to running: gambling! According to the Association of International Marathons and Distance Races (AIMS):

“Once running had ceased to be the most efficient means of relaying messages, those wealthy people who had employed couriers had discovered another purpose to running. It provided an ideal spectacle upon which to lay bets. Races were arranged solely for this purpose throughout most of the nineteenth century. In Britain, after about 1860, gentlemen’s ‘Hare and Hounds’ or ‘Harrier’ running clubs were formed, mainly for paper chasing, an early form of cross-country running.” 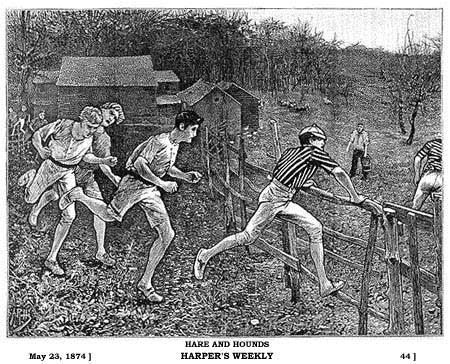 Do yourself a favor and DO NOT Google images of “hare and hound running”—most are definitely Not Safe for Work! Just look at the one single non-graphic graphic from an 1874 Harper’s Weekly that I found for you (above) and let’s leave it at that.

Many people now run recreationally all over the world. In the United States, the Road Runners Club of America was the first national association of running organizations. Founded in 1958 by the New York Road Runners and a few other clubs, RRCA put on a small number of races in its inaugural year, but by 1961 over 600 road races were held by RRCA member clubs throughout the country.

The 1970s were important in the growth of running as a sport in the US, too. According to AIMS, “Frank Shorter’s win in the 1972 Olympics had raised the profile of Marathon running in the USA, and by 1975 participation had risen to 500, although the Boston Marathon [founded in 1897] had already grown to accommodate 1800 runners.” Boston University’s Guided History sums up well the rise in popularity of amateur running in the US:

“National athletic celebrities such as Steve Prefontaine and Joan Benoit stimulated interest in the sport. The union of Bill Bowerman and University of Oregon track and field with the creation of Nike marketed the activity. Publications taught and argued for the benefits of jogging. Historical and anatomical studies argued the natural skill of jogging that belonged to humans. Jogging was no longer done only for necessity. Running became mainstream and fun.”

I will cover a history of women in the sport in a later post (hint: no one’s uterus falls out). I will also save the history of ultra running for a different posting. Stay tuned!

So there you have it—humankind has been on the run throughout history for many reasons:

And let’s not forget: beer, ice cream and pizza!