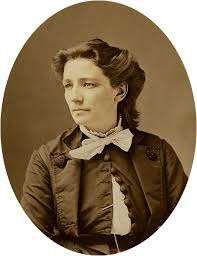 And the Nominee is…

As Americans follow the protests, rhetoric, and political processes showcased at the Republican and Democratic National Conventions, it is important to remember that there have been many controversial presidential candidates in American history. Did you know, for example, that Hillary Clinton is not the first woman to seek the presidency?

In April, 1870 Victoria Clafin Woodhull, an outspoken feminist, announced her candidacy for President of the United States. She supported woman’s suffrage, the right for women to divorce to escape bad marriages and to control their own bodies. (Her first husband was an alcoholic and adulterer.) She campaigned for 8-hour workdays, welfare for the poor, and elimination of the death penalty. Victoria also wanted to regulate monopolies and nationalize the railroads.

Woodhull’s personal life was not without controversy. During the presidential campaign she faced criminal charges for accusing Henry Ward Beecher (Harriet Beecher Stowe’s brother) of adultery and a Wall Street trader of seducing intoxicated minors.

On Election Day Victoria Woodhull’s name appeared on the ballots in some states. However any votes she did received were not included in the official tallies and the impact of her campaign on the election was never documented.