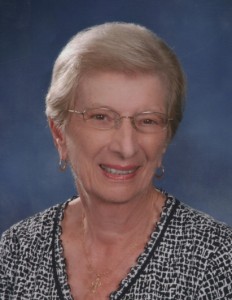 It is a bittersweet day. Mary Cornelius, 91 years young, passed away yesterday. Mary was a spit fire who never withheld her opinion. She stated the facts as she saw them and then acted with passion and conviction. She was one of the first THS members I met when I came to the Village in 1998. At that time she and her husband Walter had already volunteered at dozens of Village events, been elected to the Society’s Board of Trustees, and served on a long list of City committees and commissions.  She had a shelf filled with certificates and awards earned during five decades of distinguished service in Troy. These recognitions included one honoring her and Walter as Cornerstones of the Troy Historical Society.

In the early days of the Village, Mary donned a pioneer dress and taught hundreds of children who came to the Village for fieldtrips. In fact, one day her gingham skirt caught fire while she was teaching in the Cabin because she got too close to the burning logs in the fireplace!  She also worked tirelessly to acquire the buildings that became the Troy Historic Village. I recall walking arm-in-arm with Mary down the middle of Livernois on August 20, 2003 as we escorted the church and parsonage from Square Lake Road to Wattles. Later that week, the house mover let her push the lever to lower the church, inch by inch, on to its new foundation. She was thrilled! “I actually moved the church,” she said smiling ear to ear.

But what I will remember most fondly is not the hard-working volunteer, but the impeccably dressed gentlelady who was always concerned about others. Mary had a great heart, a delightful sense of humor, as well as a deep enduring love of history.  She was a special friend who provided me with a wonderful example of how to live with passion, kindness, dignity, and love. Thank you Mary, rest in peace.