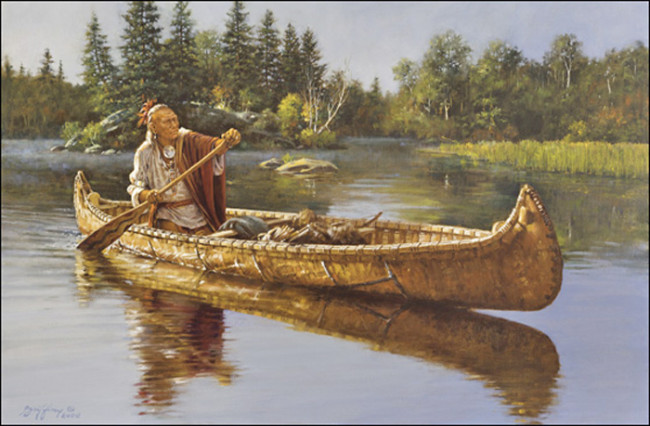 Today I stood on the Lake Michigan shore with 24 bird watchers scanning the brilliant blue sky and choppy water for migrating ducks, loons, and perhaps a rare gull. I am a lifelong birdwatcher as well as a historian. It’s November and late migrants will follow the shoreline south to escape winter’s ice and snow. As I watched a flock of ducks pass by I realized that Native Americans and early French explorers in this corner of Michigan were also snowbirds. They followed an ancient migratory route from the mouth of the St. Joseph River (where our group is birding) to the Mississippi River and south as far as the Gulf of Mexico. For centuries bands of Miami and Potawatomi traveled in birch bark canoes along this route which was documented by Fr. Jacques Marquette in 1675. They followed the St Joseph River south to a point where the river turned north, now known as South Bend, Indiana. From here the men carried their canoes and supplies overland on a five-mile portage to the Kankakee River. The original channel of the Kankakee flowed west and joined the Illinois River which emptied into the Mississippi River.

The meandering Kankakee, historically flowed through vast wetlands, but was altered when the marshes were drained and converted to farm fields. Two centuries have also changed the St. Joseph River. Drawbridges and concrete jetties now dominate the mouth of the river. But in my mind’s eye I can see wind-burned French men turn their backs to the north wind as they steer their canoes south.