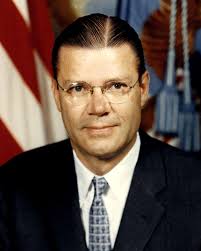 Robert Strong McNamara was an economist and military strategist who used his exceptional analytical skills in his work as Secretary of Defense, corporate Whiz Kid, and business executive. He is remembered most for overseeing the controversial escalation of the Vietnam War and for expanding the role of the Defense Secretary.

Born in San Francisco in 1916, McNamara was educated at the University of California in Berkley and the Harvard Business School. During World War II he served as a military strategist in the US Army Air Corp.

Henry Ford II tapped McNamara and nine of his military comrades following the war to transition and reorganize the manufacturing giant in the post war economy. The “Whiz Kids”, as they were called, made headlines for their skilled analyses and savvy business decisions. Not only did McNamara excel as an innovative manager, he advocated for safer, smaller vehicles. He became the first non-Ford family member to briefly hold the title President of Ford Motor Co. Ten weeks after his promotion President Kennedy recruited the 44-year old business executive to be his Secretary of Defense.

Secretary McNamara’s tenure at the Pentagon, 1961- 1968, spanned both the Kennedy and Johnson administrations. During that period, McNamara supported the increase of military advisors and troops in Vietnam, sending 500,000 Americans to war. Over 16,000 died and 42,000 would die during the seven years the war continued following his resignation.

Peace activists despised McNamara, and by the time he left the Pentagon in 1968, the Secretary had also privately concluded that the Vietnam War was a futile effort. However, he did not share this publicly for many years. He became the President of the World Bank and during the next 13 years he oversaw the bank’s expanded lending programs to finance projects in developing nations.

Towards the end of his life, McNamara spoke candidly through interviews and his autobiography, In Retrospect: The Tragedy and Lessons of Vietnam (1995) about his regrets. “We of the Kennedy and Johnson administrations,” he said, “who participated in the decisions on Vietnam acted according to what we thought were the principles and traditions of this nation. We made our decisions in light of those values. Yet we were wrong, terribly wrong. We owe it to future generations to explain why. I truly believe that we made an error not of values and intentions, but of judgment and capabilities.”