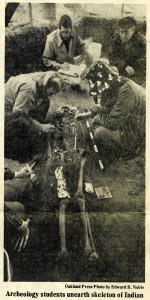 Dr. Stamps recalls the event. “Children playing in the pile of dirt from the excavated foundation had found part of a skull and other bones. Alice and Delta wondered what I could tell them about the remains. Who were these people? When and how did they live? They were full of good questions.”

With permission from the property owner, Stamps and his students completed a small three by four meter excavation. They uncovered the remains of thirty-four individuals buried in different patterns. Some were in the fetal position, some on their backs, and one lay its side. There was also a group burial with an older male on the bottom and the remains of younger individuals on top.

As a result of local publicity, Native American tribal groups demanded that the remains be turned over to them immediately for reburial in an undisclosed location. Intervention by the State of Michigan allowed Dr. Stamps to study the remains for up to twelve months before repatriation.

His careful scientific evaluation, including radio carbon dating, verified that the individuals were members of the Younge Tradition of the Late Woodland Period (900-1200 AD.) The remains were also a significant example of post mortem customs. Holes had been drilled in the tops of three of the skulls after death and disc shaped sections of the back of the skulls had been removed. Hip and shoulder joints had also been modified “This was a unique and rare scientific discovery,” explained Stamps. “At that time there were only a few other published examples of these practices in the State of Michigan and maybe fifteen examples nationally.” The study also documented examples of arthritis and severe tooth decay.

The conflict between scientific investigation and cultural tradition continues today. Analysis of remains, including DNA testing, can provide important information about diet, disease, and genetically inherited conditions. Accumulated data on the history of disease is often critical in the development of cures. Our society is also increasingly sensitive to the rights of indigenous groups, their cultural and funeral traditions, and the sanctity of ancestral remains. Passage of the Native American Graves Protection and Repatriation Act (NAGPRA) in 1990 has placed stringent requirements on museums and organizations that receive federal funds and who find or hold Native American remains, funerary objects, or objects of cultural patrimony in their collections. For more about NAGPRA go to https://www.nps.gov/archeology/tools/Laws/nagpra.htm