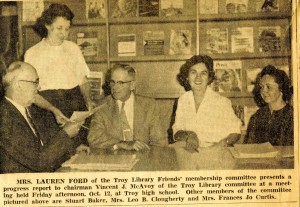 Members of the Big Beaver United Methodist Church conceived the idea of a Troy Library in the 1950s when their volunteers started collecting books. In 1959 the Troy Business and Professional Women’s Club appointed a library committee to explore the possibility of establishing a public library in the new city. While the group garnered community support, City leadership resisted allocating any funds for a library stating that there was no provision in the Charter for a public library. The City Commission (now City Council) did agree, however, to form a Troy City Library Committee in partnership with the Business and Professional Women.

In 1962 Mayor Pro-tem Vincent J. Mc Avoy, the leader of the City Library Committee, petitioned the Commission for $2,400 from the City’s contingency fund to start a reading and reference room at Troy High School. The Troy School Board had offered the school library for evening use if funds could be secured to staff the room. Mc Avoy reported that the Library Committee hoped to organize a “Friends” group that would fund raise to cover staff costs of $200 per month. The initial allocation of $2,400 would be used as start-up funds for the project. He also indicated that the ultimate goal of the Library Committee was a permanent Troy Public Library.

The discussion that followed included many now-familiar comments. The contingency fund was too small to risk allocating $2,400. More police, better sewage disposal, and road improvements were the priorities in the community. Why couldn’t the City charge people for library cards? Volunteers should raise the funds for a library.

On a 4-3 vote the City Commission did approve a $1,200 allocation of City funds for the reading room. Mr. McAvoy, the Library Committee, and supportive citizens launched the Friends of the Library at a meeting on June 28, 1962, setting the basic membership fee at $1. By October the organization had over 150 members. The Friends started collecting used books. Some books were catalogued for a future library collection. Others were resold to raise funds for the reading room. The reading and reference room at the high school was opened to the public in September.

On April 1, 1963 Troy voters approved a Charter amendment to permit the establishment of a public library. However the proposal for a library millage was deleted from the ballot to provide the Commission adequate time to study and propose more extensive changes to the City’s entire tax structure.