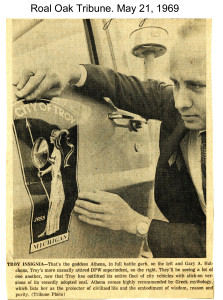 Would you ever have imagined that the stately woman pictured on the Troy city seal was once reviled by city residents who called her a traitor and complained that her nose was too big? The seal design was first proposed by City Manager Paul York, who emblazoned it on the cover of his budget proposal to the Troy City Commission in April 1967, and included a recommendation that the City adopt it as the official city seal. The drawing, by James R. Saile, an area freelance artist, did not immediately win acceptance, but, on December 16, 1968, the City Commission formally adopted the design.

Community reaction was mixed and some residents were sharply opposed, questioning the decision to adopt a seal featuring Athena. According to Greek mythology, she had taken sides against the ancient city of Troy during the Trojan War. The controversy over the design, and the design process, continued into the new year, but, on January 27, 1969, the City Commission declined to reverse the selection of Athena. The choice to retain her was, perhaps, impacted as much by City Manager York’s point that the City had already spent $140 dollars on stencils for the seal, as by the fact that Athena represented wisdom, success in warfare, and the protection of cities. Almost forty years later, however, she still stands erect, with her shield and spear, ready to protect our city.