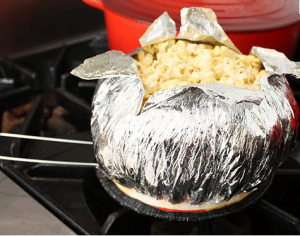 Both products contained popcorn kernels, flavored oils, and salt packaged in a light-weight aluminum pan with an expandable foil cover. Taylor-Reed sued Mennen Food Products for copyright infringement and won the case, but the decision was reversed on appeal. The appellate court determined a noteworthy difference in the products’ packaging: the foil top on Jiffy Pop pans was folded in a spiral while the foil on the EZ Pop pan was a less-efficient flattened “button.”

Mennen quickly sold Jiffy Pop to American Home Products which marketed the snack food under the tagline “it’s as much fun to make as it is to eat.” Eventually Jiffy Pop was acquired by ConAgra Foods.

While microwave popcorn replaced Jiffy Pop in many homes, the product is still popular for campers.