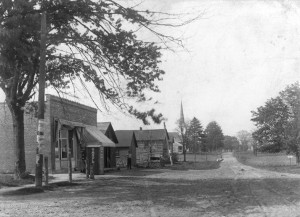 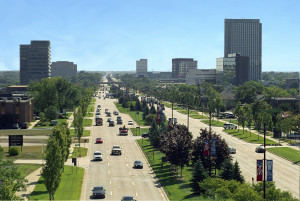 While the name of Troy’s corporate corridor doesn’t exactly fit the image, it is a terrific link to the community’s rural past. As recently as the early 1960s dairy cows strolled across Big Beaver Road twice each day as they went from the Brooks Farm milking parlor to their pasture and back. Walter Cornelius, recalled that he timed his departure for the GM Tech Center each morning so he wouldn’t have to stop and wait for the cows. Today the Holsteins are gone, but the gracious stone home and weathered outbuildings remain. The Brooks Home is now the headquarters of the Kresge Foundation, and the restored buildings are listed on the National Register of Historic Places. (Watch for a future 365 Story on the Kresge Foundation.)

The name Big Beaver can be traced back to the pioneer era. The village of Big Beaver, settled in 1825, was located at the intersection of the Paint Creek Trail, today known as Rochester Road, and an east west two-track that became Big Beaver Road. The 1877 History of Oakland County states, “The place derives its name from a large dam, erected by a colony of beavers, across a little brook near the place.” The stream, nearly gone in 1877, was better described as a seasonal creek. The industrious rodents probably disappeared before or when pioneer Ira Smith and his neighbors established their homes in the area. Taverns, blacksmith shops, a number of stores, and an inn replaced the wildlife. However, Big Beaver did not grow beyond the intersection. Economic development in Big Beaver and Troy Corners, located at the intersection of Square Lake Road and Livernois, stopped when the Grand Trunk Railroad was routed from Detroit through Royal Oak and Pontiac, and bypassed both communities. For many years, only prosperous farms dominated the landscape.

Change came after World War II when industrialists abandoned cramped factories in Detroit to build sprawling single-story facilities that could accommodate new manufacturing technologies developed during the war. They found large tracts of inexpensive land in Oakland and Macomb counties. Planners were drawn to Big Beaver Road, a direct artery between the two counties and Selfridge Air Force Base. Big Beaver Road was also a convenient half-hour commute from Detroit.

The value of the road increased even more when I-75 was platted through Oakland County. The road was quickly identified as the perfect corporate corridor bracketed by freeway exit ramps. Today gleaming glass structures line the old road that boasts four different names: Sixteen Mile, Metropolitan Parkway, Quarton Road, and Big Beaver. It is rather fitting that the section of road through the busiest part of Troy still bears the name of one of nature’s most industrious creatures.

Reprinted in part, from a Past Times column in the Troy Times in 2005