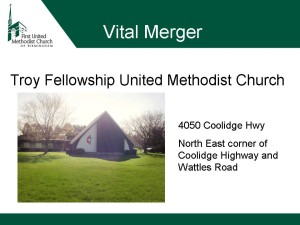 Planning for Fellowship Church began long before it had a name. A survey of Methodists living in the area of Coolidge and Wattles Road in Troy indicated interest in a local church. In 1966, 7.5 acres of land on Coolidge Road were purchased. The name Fellowship was selected in January 1967. At that time there were 93 charter members of the church.

A temporary manufactured building designed as a church was used as a sanctuary. The area to the east and north of the site was still undeveloped farmland. The church even had its own well and septic system until 1992.

Throughout its existence, Fellowship Church has been open, creative and alert to the changing needs of the neighborhood. With so much original acreage, at the beginning, part of the property was divided into 40 garden plots to be used by church members and members of the community.

On July 1, 2014 Fellowship UMC merged with Birmingham First UMC. It is now the Troy campus of that church.