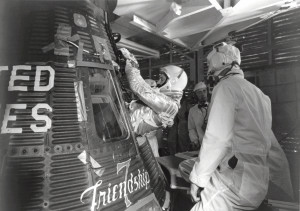 John Glenn has been many things throughout life: a United States Marine Corps aviator, engineer, astronaut, and United States senator. His accomplishments are impressive and varied. But the accomplishment that made him an instant hero whereby his name became known around the world was his successful orbit of the earth on February 20, 1962. On that day, Glenn became the third American in space and the first to orbit the earth.  This was one of the most important flights in American history not only because of the successful orbiting, but because NASA was able to observe his reactions and because he lived to tell the tale. During the mission, he circled the earth three times, reaching speeds of more than 17,000 miles per hour. The Mercury capsule Friendship 7 that he was in splashed down in the Atlantic Ocean, 800 miles southeast of Bermuda.

What many people do not remember is that during the orbit, Glenn was forced to abandon the automatic control system and instead had to make use of the manual electrical fly-by-wire system. The world and especially his own country took great note of the feat. Glenn was awarded the Space Congressional Medal of Honor by President John F. Kennedy three days after his achievement. He was also given a ticker tape parade in New York City. And it did not take long before schools and streets across the country were being named after him.