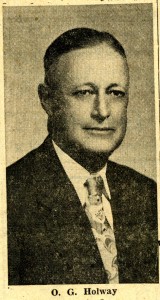 When Norman Barnard was appointed Troy’s first City Manager he stated that he would only serve on an acting or interim basis. He believed that a professional city manager should fill the position. Barnard was appointed on December 13, 1955 and submitted his resignation effective May 1, 1956.

In anticipation of his departure, the City Commission posted the position, reviewed eight applications, and conducted seven interviews before they abruptly hired Orlando Griswold Holway on a 4-3 vote on April 30, 1956. Mr. Holway was a native of La Crosse Wisconsin and a civil engineer with extensive public service experience. He had served as the Department of Public Works Director and as the Assistant City Manager of Superior, Wisconsin. He had also been the City Manager of Ispeming, Michigan; Hannibal, Missouri; and Hazel Park, Michigan.

When 56-year old O.G. accepted the job in Troy he commented about the new city. “It’s a fine place with a wonderful future. I would be proud and happy to have a part in its growth and development.”

Mr. Holway’s tenure was brief, however. Only five months later the City Commission approved a resolution “to advertise immediately for a new city manager and to accept applications.” When a new manager was found, the Commission agreed that they would give Holway a 30-day “Tenure of Office”1. This was a technical way to relieve him of the position without firing him.

Why was Holway dismissed? Commissioner George Ford stated that his “qualifications didn’t come up to what was expected.” A newspaper account at the time included the candid comments of an unnamed source who stated, “Troy has been spoiled. It had the services of Norman Barnard for a long time and he had everything at his fingertip and could get things done with speed and dispatch. We’ll have to wait a long time to get another man who can handle Troy matters as efficiently as he.”2