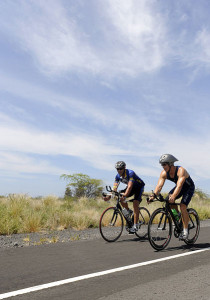 Photos: Swim, bike and run segments of the 2009 Ironman World Championship in Hawaii.

Who’s the best: swimmers, cyclists or runners? This question inspired the incredible test of endurance known today as the Ironman World Championship held in Kailua Kona, Hawaii. The inaugural Ironman that took place on February 18, 1978 on Oahu combined three different events–the 2.4 mile Waikiki Roughwater Swim, 112-mile Round the Island Bike Race and 26.2 mile Honolulu Marathon–with no break in between disciplines. The entry fee was $3.

Twelve men completed the race in 1978. Aside from bragging rights, there was no prize for the winner, taxi-driver Gordon Haller, who completed the approximately 140.6 mile course in eleven hours, forty-six minutes and fifty-eight seconds. Exhausted second-place finisher John Dunbar was seen running into parked cars during the marathon and confusedly accusing his support crew of poisoning him—having run out of water to hydrate him, they had switched to beer!

The year 1982 was also a significant one for the Hawaii Ironman and the sport of triathlon in general. There were actually two Hawaii Ironman races held that year—one in February and one in October. The February race was televised on ABC’s Wide World of Sports and featured a dehydrated and severely fatigued 23-year-old college student named Julie Moss crawling on her hands and knees to complete the race as the second place female finisher. It was Moss’ struggle and unwillingness to quit that inspired future generations of triathletes to swim, bike and run competitively.

The Hawaii Ironman has changed since the initial race in 1978. It has moved from Oahu to Hawaii’s Big Island, and now takes place in October instead of February each year. The entry fee is several hundred dollars more than the original $3. Amateurs must enter a lottery in order to register and then obtain a qualifying time to compete in this popular race, which now has over 2,000 participants each year. But the tradition of the original race, of pushing one’s limits through a grueling test of endurance, lives on.