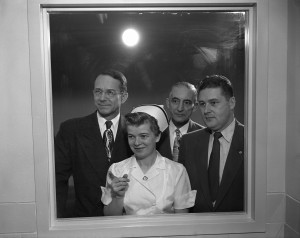 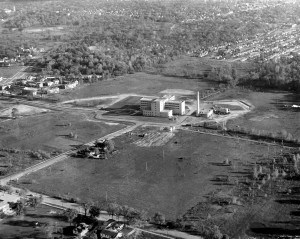 Photos: Staff of the new hospital at the 1955 Opening; Aerial view of the original Beaumont Hospital in Royal Oak

In Troy’s 60th year, Beaumont Health System is also celebrating its 60th birthday. On Jan. 24, 1955, the 238-bed William Beaumont Hospital opened its doors on 113 acres of donated farmland, as well as adjacent land from an undeveloped subdivision, at 13 Mile and Woodward Avenue in Royal Oak. Beaumont’s founders had a three-part vision: to establish a private practice, not-for-profit medical center that would deliver high quality care, always focused on the patient; to provide first-rate teaching and research; and to involve the community in supporting the hospital through philanthropy.

Growth came quickly: residency programs in 1962; a Research Institute in 1966; Beaumont’s first open-heart surgery in 1967; the first kidney transplant in 1972. And in 1977, the Troy hospital opened its doors on Dequindre Road.

This growth was driven by medical innovation. From the nation’s first closed-chest heart valve replacement, to pioneering surgery to treat urology disorders, and other minimally-invasive techniques, Beaumont doctors helped develop procedures that are used around the world. And, now, a new generation of Beaumont doctors are training at the Oakland University William Beaumont School of Medicine, which opened in 2011.

Beaumont Hospital was originally named Oakland Hospital. The name was changed to Beaumont when construction materials were sent mistakenly sent to Oakwood Hospital.

Want to learn more? Click here for a video history.