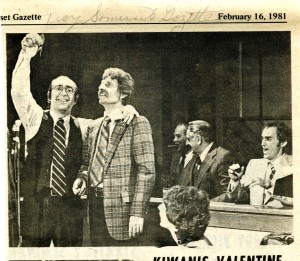 Every Valentine’s Day, romantics feel the pressure to find just the right way to express their feelings and impress the object of their affections. During the late 1970s and 1980s, many Troy residents successfully fulfilled these goals by taking their sweetie to the annual Valentine’s Day Party held by the Troy Kiwanis Club.

The parties, which originated in 1977, featured fine dining, glamorous door prizes (think Cadillacs, diamond jewelry, color televisions and romantic getaways), all wrapped up in the opportunity to do good for others. The party was the Troy Kiwanis Club’s major annual fundraiser, enabling the Kiwanis to provide support for the Boys and Girls Club of Troy, as well as for scholarships and other Club projects.

Another attraction of the parties was the attendance of celebrity guests. In 1981, for example, former Detroit Pistons coach Dick Vitale and former Detroit Lions player Charlie Sanders gave happy partygoers their door prizes. The top prize that year was a 1981 Cadillac, which Vitale can be seen handing to its new owner in his own inimitable style, in the photo, reproduced here with the permission of the Troy-Somerset Gazette.