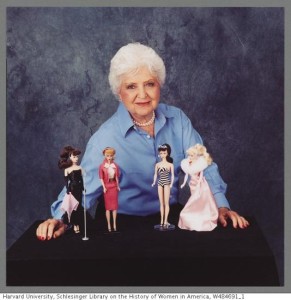 Ruth Handler, co-founder of Mattel Toys realized that daughter Barbara and her friends like to imagine themselves as grown women when they played with paper dolls. Then she realized that while they had baby dolls, there were no grown-up or teenage-style dolls for girls. Handler pursued the idea of a teen doll for girls despite the skeptical comments from her husband Elliot Handler.

Three years later, in 1959, Ruth Handler introduced Barbie Millicent Roberts at the American Toy Fair in New York City. Barbie was 11.5 inches tall and wore a striped swimsuit. She could be purchased as a blonde or brunette for $3.

There was immediate controversy over Barbie’s voluptuous and humanly impossible figure, but the critics could not argue with success. In the first year of production 300,000 Barbie dolls were sold. Over the years, more than 70 fashion designers made clothes for Mattel, using over 105 million yards of fabric. The original clothes sets sold for $1 to $5, depending on the number of accessories.

Mattel introduced Barbie’s boyfriend Ken in 1961. He was named after Handler’s son. That same year girls could also buy a redheaded Barbie. Barbie’s African American girlfriend, Christie, was introduced in 1969; however African American and Hispanic Barbies were not manufactured until 1980.

Mattel’s research indicates that today 90% of American girls ages 3-10 own a Barbie. While the exact number of dolls sold is not available, the number is in the billions.