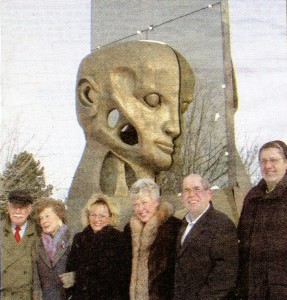 Troy City Council and friends unveiled the “Kmart Head” or as more properly known, Michael Aryton’s Reflective Head, at its new home on the Civic Center. Posing with the sculpture are, left to right, Dr. Jacob Nyenhuis, Troy Council members Jeanne Stine, Christina Broomfield, Louise Schilling, and David Lambert, and resident Len Bertin, who fought to get the sculpture up.

For more than two decades, Michael Ayrton’s Reflective Head” graced the front entrance to Kmart’s World Headquarters on Big Beaver Road. Then the powers-that-be decided it was time for a change.

The “head” was donated to the city, and sort of slipped from the radar once a former council discovered it cost (money) to install it.

It was (2004) that Troy Real Estate and Development Director Doug Smith called Barton Malow– the contractor (that built) the Troy Community Center – and asked: Do you have our head?

Mayor Louise Schilling praised Kmart, Barton Malow, Ridico, and Rossetti & Associate for helping “enable us to provide for our dreams of displaying important artworks on our Civic Center for the public to enjoy. . . .The city is at a crossroads, and so it is fitting for the Reflective Head to be placed at a crossroads.” You’ll find (the sculpture) at (the intersection of) Troy Center and Town Center Drives.

Reprinted with permission from the Somerset Gazette, February 14, 2005