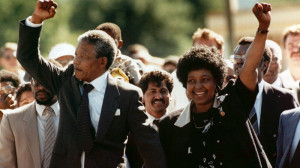 Nelson Mandela, a native of South Africa, fought Apartheid as an attorney, a political and social activist, and a member of the African National Congress. He was arrested numerous times and tried for conspiracy to overthrow the state in 1963. During the famous Rivonia Trial, he stated, “I have fought against white domination, and I have fought against black domination. I have cherished the ideal of a democratic and free society in which all persons live together in harmony and with equal opportunities. It is an ideal which I hope to live for and to achieve. But if needs be, it is an ideal for which I am prepared to die.”

Mandela was sentenced to life in prison on June 11, 1964. He served 27 years, and was released on February 11, 1990 by President Frederick Willem de Klerk.

On 10 May 1994 Nelson Mandela was inaugurated South Africa’s first democratically elected President. True to his promise he stepped down in 1999 after one term and retired from active politics. He continued to raise money for schools and clinics for the people in South Africa and published several books.

Nelson Mandela passed away in his home in Johannesburg, on December 5, 2013 at the age of 95.