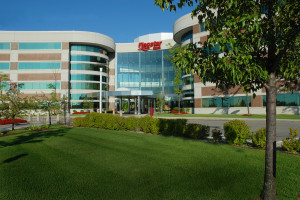 Flagstar Bank, the largest bank headquartered in Michigan, has been at home in Troy since 2000

Flagstar Bank, the largest bank headquartered in Michigan, employs about 2,750 people statewide, with approximately 1,750 at its headquarters in Troy. Flagstar has its origins in mortgage and financial service companies, founded and operated by Thomas J. Hammond, going back to the 1960s. In 1987, Hammond received a charter to open First Security Savings Bank, which operated in Bloomfield Hills. The bank changed its name to Flagstar in 1996 and, four years later, moved to a new 373,000-square-foot headquarters in Troy. From that building today, Flagstar operates national wholesale and retail mortgage businesses, as well as more than 100 bank branches in Michigan.

Over the years, Flagstar has grown from $3 million in assets to almost $10 billion. The headquarters building is located on a 25-acre, campus-like setting on Corporate Drive, with an outside eating area for employees and easy access from I-75.

Flagstar is a leader in mortgage lending, ranking ninth in the country in mortgage originations. It also ranks nationally among the top 20 mortgage servicers, handling payments and recordkeeping for over $75 billion of home loans, for nearly 400,000 borrowers.

Flagstar became a publicly traded company in 1997, with a listing on the Nasdaq. It later moved to the New York Stock Exchange, where it is listed under the symbol FBC.