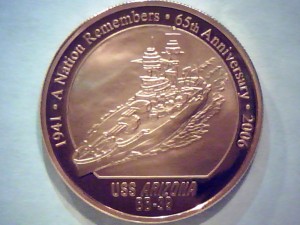 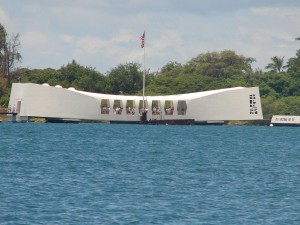 It was a Sunday morning, December 7, 1941 at 7:02 a.m. when two Army soldiers stationed at a radar station on Oahu, Hawaii witnessed the first wave of the Japanese attack intended for Pearl Harbor. The message they relayed was ignored and mistakenly believed to be U.S. B-17 planes. At 7:15 a.m. the second wave of Japanese bombers took off from their carriers. Pearl Harbor was not on alert, in fact, many of the officers and crewmen were on shore leave at the time. The Americans were taken completely by surprise by this event, which officially marked the beginning of the U.S. engagement in WWII.

Memorials to the “Day of Infamy,” so called by President Franklin Roosevelt, are dedicated to the 2,403 lives lost that day. The USS Arizona Memorial is the most prominent, but a second memorial for the USS Utah, another battleship sunk during the attack, is on the northwest side of Ford Island.

In 1990, Congress established the Pearl Harbor Commemorative Medal honoring the 50th anniversary of the attack.  It is also called the Pearl Harbor Survivor’s Medal and was awarded to any U.S. Armed Forces veteran present in Hawaii on the day of the attack and those who participated in combat against it. Civilians who had been injured or killed during the attack also received the medal.

The President directed that “the flag of the United States of America should be displayed on the homes of Americans, the White House, and all United States government buildings. The flag should be flown at half-mast to honor those who died in the attack on Pearl Harbor.” Speeches, wreath-laying ceremonies, gatherings, and testaments of survivors and their families are a part of the day.