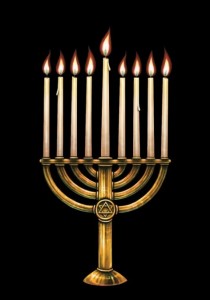 December marks the celebration of many religious holidays including the eight-day Jewish observance of Hanukkah. Hebrew for “Dedication”, Hanukkah is celebrated on the 25th day of Kislev on the Hebrew Calendar. While Hanukkah is now an important Jewish holiday, it is not listed in the Torah because the events that prompted the holiday occurred after it was written. It is, however mentioned in the Biblical New Testament as Jesus attended a “Feast of Dedication.”

The history of Hanukkah can be traced back more than 2,000 years when Israel was ruled by the Syrian-Greek Empire.  The ascension of Antiochus IV to the Seleucid throne meant the prohibition of the Jewish religious practices. The Jewish people were instructed to adore Greek gods and in 168 B.C., Antiochus IV dishonored the sacred Second Temple in Jerusalem by sacrificing pigs on an altar built there to honor Zeus.

This desecration was the final straw for the Maccabees—a small group led by the Jewish priest Mattathias and his five sons—who instigated a rebellion against the Seleucid dynasty.  After Mattathias’ death in 166 B.C., his son Judah led the Jews to victory, driving the Syrians out of Israel in two years. The altar of the Second Temple was rebuilt and the Menorah, a golden candelabrum with seven branches symbolizing knowledge and creation, was lit. During this time of Jerusalem’s rebuilding, the Jews were unable to celebrate Sukkot during the autumn, so Judah decided that Sukkot would be celebrated after the Temple was rededicated on the 25th of Kislev.

It was during the re-dedication of the Temple that Judah and the loyal Maccabees observed what is called the Hanukkah “miracle.”  According to the Talmud, one of the most central texts in Judaism, there was enough untainted olive oil to keep the candles on the Menorah for only one night. Miraculously, the candles continued to burn for eight nights (there are other versions of this story that don’t mention the olive oil).

While there are slightly different versions of the Hanukkah origination story, the celebration has remained the same for centuries. The holiday is usually focused on the nine-candle menorah, known as Hanukiah in Hebrew.  On each of the eight nights at sundown, a candle called the Shamash or helper is used to light the eight candles, while prayers are recited and the menorah placed in a window as a reminder of the miracle that occurred. Many traditional foods that are eaten during Hanukkah like latkes (potato pancakes) and sufganiyot (jelly-filled donuts) are deep fried in oil. Jewish families traditionally give each other gifts during Hanukkah and Jewish children play with a four-sided spinning top called a dreidel.

In Troy, Shir Tikvah will host family services during the week of Hanukkah and Music Shabbat-Chanukah Service at sundown on December 11. On December 6th a community menorah lighting event will take place in downtown Detroit called “Menorah in the D.” For more information, visit the Shir Tikvah website at https://shirtikvah.org