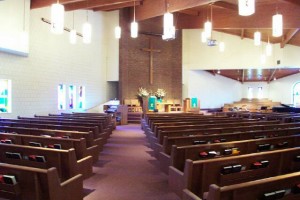 For many years, the Korean United Methodist Church (KUMC) and the City of Troy have forged a strong bond. Reverend David Kim of TroyHope Ministry – the English-speaking Ministry affiliated with the church – explained that each year the KUMC gives small gifts to City officials including the mayor and prominent leaders like the Superintendent of Schools. The church wishes to pay respect to the local government and community that has welcomed them to Troy.

Personal bonds are also forged between individual congregants and the church. Reverend Kim explains that many Asian Americans in the City and in Oakland County were adopted by non-Asian families.  As these ethnic Asians become adults they wish “to find some kind of root” because they want to be “a part of a majority instead of a minority.” The Korean church offers a form of inclusion because the majority of the congregation is Asian American.

Moreover, Kim speaks of the expanding bond in a very unusual way. The church offers a six-week program called “First Drive” for 7 to 15 year olds.  The program helps them understand the engineering mindset. Since many Asian Americans in Southeast Michigan are doctors and engineers, Kim wants to show children, regardless of race and ethnicity, that engineering is fun!

The KUMC and Troy have forged bonds that continue to grow in conventional and unconventional ways.