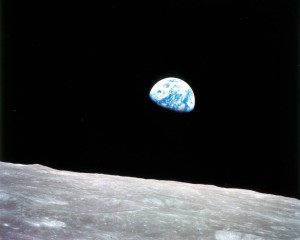 On Christmas Eve 1968 astronauts Col. Frank Borman, Capt. James A. Lovell, Jr., and Major William A. Anders orbited the moon in Apollo 8. They were the first humans to accomplish this task, which was an important step toward the goal of landing men on the moon. Additionally the crew gathered scientific and visual information about the lunar surface. Their photos were transmitted back to Earth and broadcast live around the world on television. Among those images was an iconic picture of our bright blue planet rising above the lunar surface.

“We were told that on Christmas Eve we would have the largest audience that had ever listened to a human voice,” recalled Borman during 40th anniversary celebrations in 2008. “And the only instructions that we got from NASA was to do something appropriate.”1

The crew took turns reading from the King James Bible. “The first ten verses of Genesis is the foundation of many of the world’s religions, not just the Christian religion,” said Jim Lovell. “There are more people in other religions than the Christian religion around the world, and so this would be appropriate to that and so that’s how it came to pass.”2

The crew concluded their transmission by saying, “We close with good night, good luck, merry Christmas, and God bless all of you, all of you on this good Earth.”

Following the broadcast, Madalyn Murray O’Hair, the founder of American Atheists, sued the U.S. government, alleging that the transmission violated the First Amendment. The Supreme Court dismissed the suit due to lack of jurisdiction.