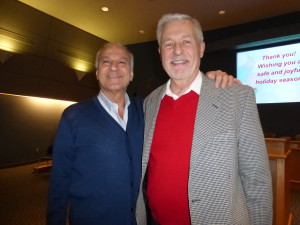 It was chocolate and cookies that first stirred Kamal Shouhayib’s interest in America. He was 10 years old when a major earthquake hit his native Lebanon. In the care packages sent from America were chocolate chip cookies and chocolates, things he hadn’t known about before that. He would talk his father into taking him to visit the American Embassy in Beirut and his dream of getting to America began.

When it was time for college in 1967, he headed from his home in Aley, Lebanon to the U.S. and ended up at Michigan Tech in January. Need we say he had never seen so much snow? There he would earn his degree in civil engineering and head in our direction after graduation. “I couldn’t wait to get out of there,” he says with a grin. “There were no girls.”

He worked a couple of years in civil engineering, but knew he wanted to be a developer, like his dad. He would found The Choice Group and settle in Troy in 1972 and also become a citizen. His business was in the Top of Troy until very recently when he purchased the office plaza at the corner of Kirts and Livernois and transformed it for the 21st century. Okay, everyone at Choice admits they love parking right outside their office door. As a developer, Choice has built over a dozen subdivisions in our area. They also have shopping centers and manufactured home parks across the country.

“There is nothing like Troy. Troy is such great city. It’s our school district and our city government,” he observes.

It wasn’t long before Kamal became a “joiner” in our town. He served on the Board of the Troy Chamber of Commerce, and on the Board of the Boys & Girls Club of Troy. He stepped up to help complete the Peace Garden at the Troy Public Library. Shouhayib is a firm believer in working for education and our youth. He a strong supporter of the Troy Community Coalition, noting: “I believe in that so much. It’s a very vital thing that helps our kids.”

To show his appreciation for this country, in 1988 he started a writing competition for middle school students in communities where he does business. “This (contest) allows me and Yasmine (his wife) to share what America means to us…It allows us to share our love for this country.” Kamal and Yasmine also share their appreciation for the volunteers in the community, annually sponsoring Leadership Troy’s Volunteer Awards Dinner. Kamal also has named one of Troy’s Distinguished Citizens.

“We are lucky that we have so many wonderful volunteers here. They are our best and brightest. We need to encourage and support them whenever we can. I cannot have had a better honor than that of Distinguished Citizen. It’s an incentive to do more. Everybody dreams to be here and our kids take things for granted.”

“Obviously Rotary has a special place in my heart. I started in Rotary in 1982. We deal with the welfare and well-being of our kids, and that’s what matters most, our kids. It brings out the best in us because it’s all about good deeds.”

He also started three Rotary Clubs in Aley, Lebanon and observes that in his native land “Rotary has affected their minds and souls, and now (they) see that they should do things for the downtrodden. I just feel so good to be part of it and to have shared Rotary’s ideals with them.”