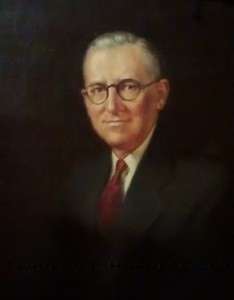 Clarence J. Sanger (1880- 1946) was the spokesman for the group of investors who developed White Chapel Memorial Park Cemetery and challenged the traditional view of cemeteries. Rather than a somber graveyard filled with rows of tombstones Sanger, and his colleagues envisioned a beautiful park-like setting that inspired the living and memorialized those who had passed.

Sanger proposed the project to Detroit architect Alvin Harley. When Mr. Harley and his colleagues submitted their preliminary sketches, Mr. Sanger announced, “Gentlemen, I like your ideas. But I want the finished project to cost twice as much. White Chapel must be the ultimate.”1

Construction of White Chapel Cemetery in Section 16 of Troy Township began in 1925. It was built on farmland previously held by the Pearce and Daniels families. By 1929 White Chapel was operational and offered mausoleum space as well as outdoor burial plots. The facilities have been expanded over time and now include three chapels, 26 themed gardens with beautiful sculptures, and a large fountain and pond.

Troy: A City from the Corners, Troy Historical Society, 2005