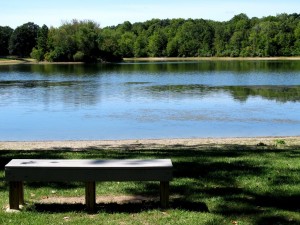 This 2-part 365 story was written by Ward Randol, who chairs the board lake committee of the Lake Charnwood Property Owners Association, with the invaluable help of Kurt Bovensiep, Public Works Manager of Troy’s DPW which has a historical collection of aerial photography maps showing the changes in Troy’s topography since the 1960’s.

Not far north of Firefighters Park, near the corner of Coolidge and South Boulevard, off Mountain Drive tucked into the northwest corner of Troy’s Section 5 according to the map is an officially nameless lake slightly smaller than Lake Charnwood.  This tenth Troy lake was built as a retention pond in the 1970’s and is fed from wetlands to the north. Its shores are only partly developed with homes, perhaps because the north shore is marshy.

The last and southernmost of the eleven lakes shown on Troy maps is Sylvan Lake, west of Rochester Road north of Long Lake Road.  It was constructed in the 1960’s as a retention pond for the nearby subdivisions, is fed by runoff and empties into the Red Run Drain through Troy’s Sylvan Glen Golf Course.  This is the only one of Troy’s lakes with public access, from a small Troy park on Rochester Road immediately south of Camp Ticonderoga.  In the spring Sylvan Lake is a magnet for migrating ducks and other water birds, and thus of course for local bird watchers.

There are other bodies of water in Troy that look like small lakes but are not shown as such (or at all) on Troy’s maps.  Notable examples are the large pond in Firefighters Park, and the long, skinny “lake” (once again the Rouge) that borders the east side of Coolidge Highway north of Long Lake Road.  It will be interesting to see if Troy’s waterscapes change again in the 21st century.