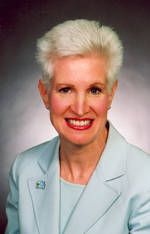 There is no mystery about why Mary Kerwin was named Troy’s Distinguished Citizen in 2012 – her community activities and professional achievements unquestionably merit this award. During more than 29 years in Troy, Ms. Kerwin has provided service and leadership in the City’s schools, community organizations and government, as well as in her own parish. She was also named Troy Diversity Champion in 2014.

Ms. Kerwin was introduced to the importance of education and civic activity by her mother, an elementary school teacher and a volunteer voter registrar for the League of Women Voters. Ms. Kerwin holds a BA in English from Immaculate Heart College and Lifetime Teacher Certification from Cal State LA.

Ms. Kerwin, who, with her husband Stormy Beyer, has two grown children, had extensive involvement with Troy schools: she was PTA President at Hamilton; PTO President at Smith; and a member of the THS Booster Board. District-wide, she served as Parliamentarian for the PTA/PTO Presidents’ Council, and a member of the District School Improvement Team. She served eight years on the Troy Board of Education, holding every Board office at some point during her tenure.

Ms. Kerwin, an Alumna of the Troy Citizens Academy, served on the Troy Futures Task Force Image and Feel and Lifestyle committees, and the Troy Planning Commission, one year as Vice-Chair. She served four years on Troy City Council, including one year as Mayor Pro Tem. She was also elected President of the Michigan Municipal League’s Elected Officials Academy.

The owner of Kerwin Consulting, LLC, Ms. Kerwin works as a Consultant and Instructor for the Michigan Association of School Boards and the University of Michigan-Dearborn Institute for Local Government. In addition to the state and nationally-recognized expertise she developed in her work for the City of Troy and Troy Schools, she brings a diverse portfolio of community leadership experiences to her consulting.