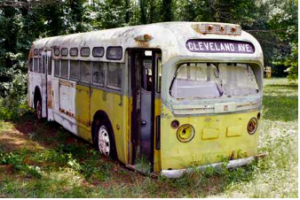 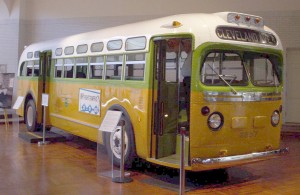 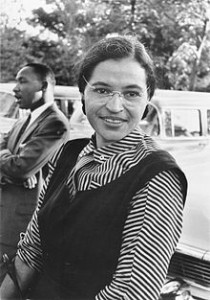 On December 1, 1955 a small personal protest ignited the public Civil Rights Movement in our country. Rosa Parks, a 42-year old seamstress in Montgomery, Alabama and a member of the National Association for the Advancement of Colored People (NAACP,) refused to give her seat on a Montgomery bus to a white man.  Jim Crow segregation laws mandated that the first 10 rows of bus seats were reserved for white patrons, and that when those seats were fully occupied, black riders had to give their seats to new white riders and move to the back of the bus. When Parks refused to move, the driver notified police and she was arrested and fined.

The record clearly states that Ms. Parks acted spontaneously. However, the NAACP and associated groups needed her simple action to spark a much larger protest. By Monday, December 5 the Montgomery Improvement Association, whose members included Martin Luther King Jr., other local ministers, and community activists, organized the Montgomery Bus Boycott. African Americans, which comprised 75% of the Montgomery City Bus Lines ridership, refused to use the public transportation system, costing the company $3,000/ day. This non-violent protest gained national attention and tested Jim Crow laws in the courts.

On June 5, 1956 the federal court in Montgomery ruled that segregation on a public transportation system violated the 14th Amendment to the U.S. Constitution. The Amendment provides all citizens, regardless of race, equal protection under state and federal laws. Montgomery appealed the decision to the U.S. Supreme Court, which upheld the lower court’s decision on December 21, 1956. Following the Supreme Court decision the 381-day boycott ended, but the efforts of Dr. King, his newly organized Southern Christian Leadership Conference, the NAACP, and other civil rights organizations continued.

Rosa Parks was ultimately heralded as the “Mother of the Civil Rights Movement.” She received many honors including the Congressional Gold Medal and the Presidential Medal of Freedom. Ms. Parks passed away in 2005. Montgomery bus #2857 was purchased by Roy Hubert Summerford, who recognized its historic value. It remained hidden for many years to protect it from the KKK and others who would destroy it. The Henry Ford Museum purchased the artifact in October 2001 for $427,919 and restored it.  It is now exhibited at The Henry Ford in Dearborn, Michigan.

Bus #2857 before and after restoration