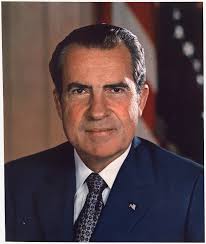 On August 9, 1974 President Richard M. Nixon became the only U.S. President to resign from office. Within months of his successful 1972 reelection, Nixon’s administration became embroiled in scandal. Precipitated by the burglary of the National Democratic Committee by members of Nixon’s reelection team, the two-year Watergate investigation uncovered layers of illegal activity and lies. Tape recorded conversations from the Oval Office eventually tied the President to the cover-up.

Facing impeachment, President Nixon chose to step down, announcing his resignation on national television. In his statement to the American people he blamed the press for “leaks and accusations and innuendo” rather than admitting any personal wrongdoing.

While President Nixon had improved international relations with China and the USSR, brokered a nuclear arms treaty, and ended US military involvement in Viet Nam, his legacy was defined by Watergate. And, in a sidebar to history, political scandals since Watergate are still commonly tagged with the suffix “gate.”