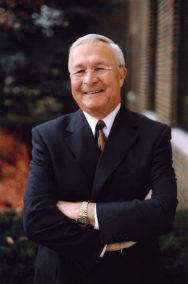 Lewis Brooks Patterson and his fraternal twin Stephen were born January 4, 1939 and grew up on Glastonbury Road in northwest Detroit. The product of a parochial education, Brooks graduated fromthe University of Detroit Jesuit High School (1957). He then earned both a bachelor’s degree and a law degree from the University of Detroit.

Following his election as the Oakland County Executive in 1992, Brooks also earned a reputation as a skilled administrator and financial manager. He and his team introduced many new initiatives including rolling three-year budgets and innovative programs that have successfully attracted hundreds of high-tech companies and thousands of jobs to the county and Troy. Today Oakland County boasts a triple-A bond rating and a large fund balance.

In recent years, the hard-nosed Brooks has also endured personal hardships. His lost both his twin brother, Steve, and his son, Brooks Stuart, in 2002. Then, in August 2012 Patterson was critically injured in a car accident. His chauffeur was paralyzed from the neck down and Brooks suffered numerous broken bones and was in a coma for seventeen days. Three months later, while still hospitalized, he was reelected to his sixth term. Since the accident Brooks has conducted most of the County’s business from a wheelchair.

Brooks Patterson remains staunchly committed to Oakland County, and, conversely, is known for criticizing Detroit. In a widely publicized 2014 New Yorker interview by Paige Williams he stated, “I don’t work for Detroit—they don’t sign my paycheck. The residents out here know I’m hard-working and I’m honest. Yeah, I sometimes say things that make people cringe.” On another occasion, he said, “I can get away with it because me and my team, we’re good at what we do. People are gonna forgive me my peccadilloes because we’re the best-managed county in America.”1