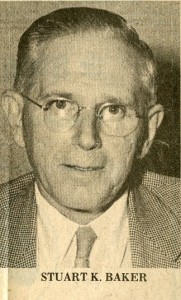 Stuart K. Baker was born on a farm in Ovid, Michigan on May 19, 1901. His lifelong career as an educator began as a teacher in a one-room schoolhouse in Clinton County. He moved to Troy Township in 1929 to work as the head of the Big Beaver District. During the Depression he was responsible for establishing a high school in Big Beaver, which graduated its first class in 1938.

In the 1940s Baker spearheaded efforts to consolidate all Troy schools into one district. Following voter approval of this initiative in 1948, he was appointed the first superintendent of the Troy School District. School services were expanded during Mr. Baker’s tenure to include bus transportation and new classes in home economics, physical education, and industrial arts. He also oversaw the construction of many new schools and the expansion of school financing. Mr. Baker retired in 1977.

Upon his death in 1979 at the age of 78, then Superintendent Don R. Shader remarked, “We will miss him. He made his contribution and provided services to the community. We are most grateful for that service.”