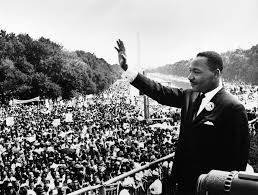 On August 28, 1963 Martin Luther King Jr. stood on the steps of the Lincoln Memorial and gazed out at 250,000 civil rights supporters gathered for the March on Washington for Jobs and Freedom.  He held the typewritten text of a speech that referenced the Declaration of Independence, the Emancipation Proclamation, and the U.S. Constitution.  The text included words from scripture and Negro spirituals, from the song My Country ‘Tis of Thee, and from Abraham Lincoln. He had delivered parts of the speech before, including in Detroit when he marched on Woodward Ave. with UAW President Walter Reuther and Reverend C.L. Franklin, a Baptist minister and Aretha Franklin’s father.

King’s close friends, Stanley Levison and Clarence Benjamin Jones, had worked with him on multiple versions of the speech. The men agreed, however, that planning the march had occupied so much time that the content of the speech received little attention. According to Jones, twelve hours before approaching the podium, Dr. King had not decided what he was going to say. Even more remarkable, King later recalled that half way through the speech, he spoke extemporaneously. “I started out reading the speech, and I read it down to a point . . . the audience response was wonderful that day. . . And all of a sudden this thing came to me that. . . I’d used many times before . . . ‘I have a dream.’ And I just felt that I wanted to use it here . . . I used it, and at that point I just turned aside from the manuscript altogether. I didn’t come back to it.”

The “I Have a Dream” speech was considered a turning point in the civil rights movement and remains one of the most important addresses delivered in the 20th century. James Reston of the New York Times stated, “Dr. King touched all the themes of the day, only better than anyone else. He was full of the symbolism of Lincoln and Gandhi, and the cadences of the Bible. He was both militant and sad, and he sent the crowd away feeling that the long journey had been worthwhile.”

Following his memorable oration, Time magazine named Martin Luther King Jr. “Man of the Year” in 1963 and 1964 and King was awarded the Nobel Peace Prize on October 14, 1964. Fifty-two years later, King’s words still resonate. Schoolchildren listen to the speech and memorize portions of it.

The full text of the “I Have a Dream” speech is attached as a PDF document.

I Have a Dream Speech-NARA