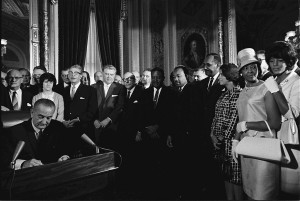 Following the assassination of President John F. Kennedy on November 22, 1963, Vice President Lyndon B. Johnson assumed the presidency and quickly pressed for enactment of unfinished legislation initiated by JFK. In 1964 Congress passed and Johnson signed into law two particularly significant pieces of legislation– the Civil Rights Act and the Economic Opportunity Act.

These early legislative victories gave LBJ the green light to advance a “war on poverty” in which he challenged Americans to build a “Great Society.”  After soundly defeating conservative Senator Barry Goldwater in the 1964 presidential election, LBJ harnessed his extensive tactical skills and his forceful personality to pass an ambitious list of progressive legislative initiatives. His liberal domestic agenda clashed, however, with his aggressive policies in Vietnam. The financial and human cost of the Vietnam War eventually overshadowed his domestic agenda. Critics charged that many of the programs and services established during his administration created bureaucracies rather than cost effective solutions. Never the less, the impact of Johnson’s “Great Society” continues to affect the lives of Americans today.

Here is a list of major federal acts approved during President Johnson’s administration.