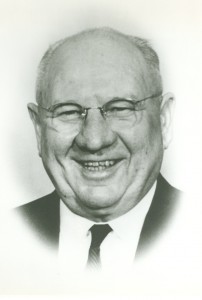 Elmer was raised on a farm in Troy Township and married Sadie Davidson who lived across the road. In 1920 Elmer and his partner Henry Eseman opened a garage in Big Beaver. Two years later their business became a Ford dealership. Auto Owners Insurance approached the men in 1923 and suggested that they sell insurance with the cars. The company, E.M. Schroeder Insurance, was established and remains the oldest business in Troy. (See 365 Story on Feb. 5)

In 1940 Elmer and his neighbors met in the dealership garage and decided to organize a volunteer fire department. One of the service bays was designated to store a fire rig that the men built on an old Ford chassis. Elmer Schroeder succeeded John Lee Halsey as the chief of the all-volunteer unit in April 1941 and remained the chief at Station 1 for seventeen years, retiring in 1958.

In addition to his years of service as a volunteer fireman, Mr. Schroeder was a member of the Big Beaver Businessmen’s Association, Troy Rotary Club, the Metropolitan Club of Troy Spirit, Clawson-Troy Elks, the Southeastern Michigan Fire Chiefs Association, and a charter member of the Exchange Club of Troy.  He also served on the Troy School Board for twenty-one years.

Fire Calls and Station Stories: An Illustrated History of the Volunteer Troy Fire Department, by Loraine Campbell, and Fred Barnard; 2009

Pathways of History Through Troy, by Lois Lance, 1976