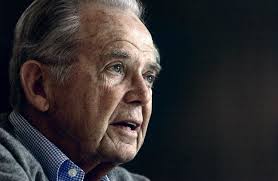 William G. Milliken is the longest serving Michigan’s governor in our state’s history. His fourteen years of service, from January 22, 1969 to January 1, 1983, coincided with the City of Troy’s period of exceptional growth.

Milliken was born in Traverse City on March 26, 1922 to a family familiar with public service. His father had served as Mayor of Traverse City and as a Michigan State Senator and his mother was the first woman elected to the Traverse City School Board.

Bill served in the Army Air Corps during WWII and flew he flew 50 combat missions in B-24 bombers, surviving two crash landings. For his outstanding service he received seven honors, including a Purple Heart and an Air Medal. After he was discharged, Milliken married his college sweetheart, Helen, and returned to Yale to complete his degree.

Milliken entered the political arena in 1947 when he was appointed to the Michigan Waterways Commission by Governor Kim Sigler. In 1960 he was elected to the State Senate, served one term, and then became the Lieutenant Governor under George Romney. When Romney was appointed to President Nixon’s cabinet, Milliken moved into the Governor’s office. Subsequently, Milliken was elected Governor to four full terms as a moderate Republican. During his administration, Michigan approved the open meetings and freedom of information laws.