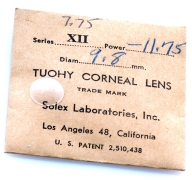 Every year millions of contact lens prescriptions are filled and every morning thousands of Troy residents put contacts in their eyes as they get ready for the day. But who first thought of correcting vision by placing a lens on the cornea? When were contacts invented?

The concept is very old. In 1508 Leonardo da Vinci determined that if a person placed their face in a bowl of water or placed a water-filled glass over their eye, their vision was improved. The water neutralized the light-bending (refractive) power of the cornea and substituted the refractive power of the glass. During the 1800s, while pioneers were building log cabins in Troy Township, no less than a half dozen scientists, mathematicians, physicians, and astronomers were experimenting with fine glass lens that were ground to fit over the contours of the human cornea. Their goal was to correct or reduce the effects of serious eye disease. These early lens were very heavy and uncomfortable, however, and could only be worn for brief periods.

The development of plastics in the early 20th century allowed scientists to overcome the limitations of heavy and fragile glass lenses. William Feinbloom was the first scientist to use plastic to fabricate a contact lens in 1936.  In 1947 Kevin Touhy introduced the first modern corneal plastic contact lens. His design was refined and in the early 1950s PMMA (poly-methyl-methacrylate) or “hard lenses” were available commercially to correct near and far-sightedness. They were the only contacts prescribed for the next 20 years. Soft lenses, made from water-absorbing or hydrophilic plastic, were introduced in the 1970s. By the end of the decade gas-permeable hard lenses were introduced. Today numerous brands of comfortable, safe, extended wear lenses are available.