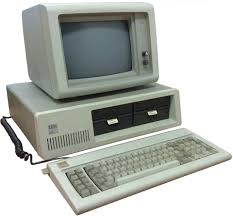 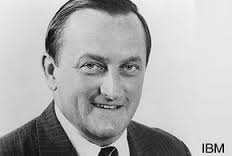 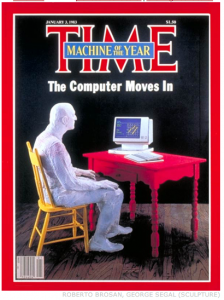 On August 12, 1981 IBM released the IBM PC, a “personal computer” that retailed for $1565. The new PC came with one or two 160K floppy drives and an optional color monitor. The keyboard with a numeric keypad and 10 special function keys was connected to the unit by a 6-foot coiled cable.

The first PC ran on a 4.77 MHz Intel 8088 microprocessor, an important distinction from previous IBM products. This machine was constructed from “off the shelf” parts and was developed in just one year by a dozen strategists who were hand-picked by Bill Lowe, a physicist and systems manager in the company’s Boca Raton facility. The group worked 24/7 to develop a plan for hardware, software, manufacturing and marketing. Then they adhered closely to the plan: a single model for one product; open architecture with tested technology; and outside distributors, including Sears & Roebucks and Computerland, to quickly saturate the market.

Consumer response to the new PC was incredible. By the end of 1982 sales were estimated at one-per-minute during business days with a new qualified retailer was added to the list of outlets each day. The overall impact on society was profound as evidenced by Time magazine naming the computer as “Man of the Year”.