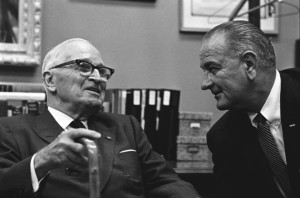 Following his election in 1964, President Lyndon Baines Johnson asked Americans to join him in “the battle to build the Great Society.” A progressive Democrat and a seasoned legislative strategist, Johnson lobbied for quick passage of Medicare, a plan to provide federally funded health insurance to senior citizens. Statistics showed that in the early 1960s over 50% of elderly US citizens (over 65) had no health care coverage and one third of the nation’s seniors lived in poverty.

Other presidents had tried and failed to pass similar legislation. FDR initially included provisions for federally funded health insurance for seniors in the Social Security Act of 1935, but removed the plan to pass the bill. President Truman and President Kennedy also attempted and failed to move senior health care legislation through congress. The American Medical Association lobbied against what they perceived as socialized medicine while conservatives argued that the plan would eliminate personal choice in seeking medical care.

LBJ was unrelenting, however, in his efforts to push the bill through Congress. Medicare was passed by both houses of Congress on July 9, 1965 and signed into law on July 30. The signing ceremony was held at the Harry S. Truman Library and Museum in Independence, Missouri with President Johnson seated next to the 81-year old former President Truman and his wife, Bess. Then, after instructing them how to fill out the Medicare Application form, President Johnson presented Mr. and Mrs. Truman with the first two Medicare Cards ever issued to senior citizens.

Medicare coverage has been expanded over the years to provide coverage for younger Americans suffering from long-term disabilities including renal failure and Lou Gehrig ’s Disease (ALS) and the terminally ill who seek hospice care. By the end of 2014, 49,435,610 there were people in the United States receiving Medicare benefits.