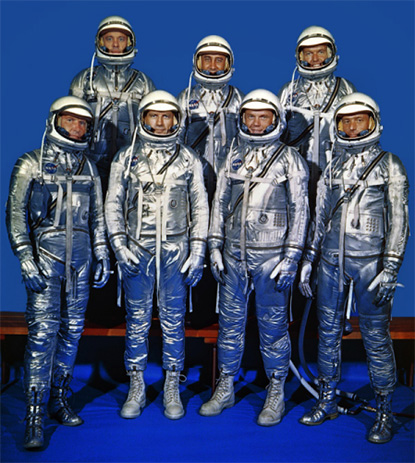 The three goals of the NASA Mercury Project were to place a spacecraft carrying a human into orbital flight around Earth, to observe how man performed in the weightless space environment, and to return the astronaut and the spacecraft safely to Earth. This early in the space program scientists, engineers, and physicians did not know how the human body would react to the g-force acceleration required to put a spacecraft into space, the effects of weightlessness, or the psychological challenges related to the mission. They believed, however, that the best candidates for space travel were test pilots who endured similar physical conditions and had advanced technical training.

One hundred ten candidates were interviewed and given rigorous written tests. Thirty-two men with the highest scores were then subjected to batteries of physical, mental and psychological tests. The Mercury Seven were selected from the eighteen individuals who completed all the tests and were recommended for the program. Once introduced to the public they quickly became American heroes.