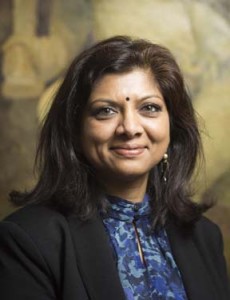 The Troy Historical Society and local Asian Americans are working in partnership to document the experiences of Asian immigrants who have made Troy their home during the last 50 years. This 365 Story is highlights Padma Kuppa who was recently interviewed for the project.

Padma Kuppa, a Troy resident for the last 17 years, moved to the United States from India before she started kindergarten. In 1969, her father came to the Stony Brook University on Long Island in New York as a graduate student and later became a post-doctoral fellow; her mom also went back to school and eventually earned a PhD in biology, and was a post-doctoral fellow at MIT and Georgetown University. Padma’s family was one of many who arrived in the US from Asia, following passage of the Immigration and Naturalization Act of 1965. This legislation changed US immigration policy to welcome Asians and Africans with technical skills or family ties in the United States. While Padma grew up as an American she was always aware that she was different, and sometimes the “other.”

When she was fifteen Padma’s family returned to India, unlike most immigrants of that era. “That move was very difficult,” she said. “I did not think or behave as an Indian. I was Indian on the outside and American on the inside. I went from being a nerdy goody-two-shoes to the rebellious child my parents did not want me to be.” But Padma remained in India for the next seven years.

After she completed her bachelor’s degree in engineering, Padma obtained a student visa in 1998 and returned to the United States for graduate school. “I needed to return to America to find balance, to understand who I am,” she explained. She and her husband made their home in New York while they got their green cards; soon after their two kids were born, he took a position in Michigan and the family moved to Troy.

“We bought a house in Troy,” Padma explained. “That house became home and will always be our home. For me, family is the community I live amongst. I have met friends and mentors and people who have become like sisters. . . I wanted to be involved in this community. When my children were very young I volunteered to run a preschool play group through the temple. When they attended school, I got involved in Girl Scouts.” Padma also served on Troy’s Ethnic Advisory Committee, which was formed after 9/11/01, to engage and celebrate the diversity of the community, and was a founder of the Troy Area Interfaith Group.

In 2015 Ms. Kuppa submitted her application to fill a seat on Troy City Council that was vacated when Wade Fleming was elected as an Oakland County Commissioner. While she was not selected for the position, Padma was appointed to the Troy Planning Commission. “I am the first Asian-American woman to serve on the commission,” she stated proudly.
Padma Kuppa believes that pluralism is a noun and a verb. It is a balance of who you are, how you think, and how you act. She defines herself as Indian-American, Hindu and Telugu, as well as a wife, mother, employee and friend – accepting the plurality of her identity helps her understand who she is.